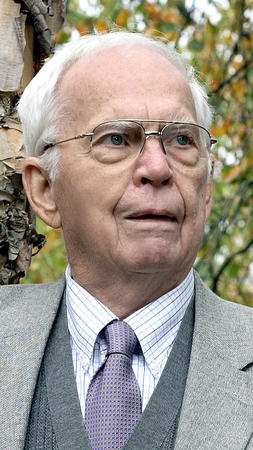 Dr. Vernon B. Mountcastle, whose studies of how brain cells conspire to process perceptions and movement laid the foundations of modern neuroscience, died last Sunday at his home in Baltimore. He was 96. His daughter, Anne Clayton Bainbridge, said the cause was complications of the flu.

Dr. Mountcastle, known by some as the Jacques Cousteau of the cortex, began his work in the 1940s, when the brain was still very much a black box, as dark as the ocean floor. Scientists knew from studying brain injuries that certain neural regions had specialized functions — for example, to process language. But they had little idea of how brain cells, or neurons, did the work they did.

The mystery seemed especially deep when it came to so-called higher functions like thinking and perception, which are centered in the neocortex, the thin outer layer of the brain.

Dr. Mountcastle stumbled on an answer, and recognized its importance immediately. In a series of painstaking experiments, he used an electrode to record the activity of neurons in the brains of cats, as the animals responded to being touched — on the fur, for instance, or on the skin. An odd pattern emerged: Neurons that fired together in response to a specific kind of touch were stacked in columns, one on top of another.

Those on the periphery did not fire in the same way.

“These facts support a hypothesis,” he concluded in a 1957 report that became a classic in the field, “that the elementary pattern of organization in the cerebral cortex is a vertically oriented column or cylinder of cells” working together on a single job.

Despite deep skepticism among his colleagues about the hypothesis, brain scientists soon found the same pattern in areas of the neocortex that process vision and other functions: cells working together stacked in columns. The finding confirmed a fundamental property of the brain, namely that it has specialized modules that divvy up the jobs of parsing sensations, making decisions and acting.

“He essentially produced the first functional map of the neocortex,” said Dr. Solomon Snyder, a professor of neuroscience at the Johns Hopkins School of Medicine, where Dr. Mountcastle spent his career. “Without that, no one was going to get anywhere.”

Dr. Mountcastle longed to know how brain cells could integrate these different jobs. In another seminal series of experiments, he trained monkeys to make a variety of movements and decisions, with a treat as their reward. Again, he used an electrode wire to take direct recordings of cells in the animals’ brains — only this time the animals were active, moving and making decisions, rather than passively being touched.

He found, in an area of the brain called the parietal lobe, strong evidence that the discrete columns of cells that did specific jobs talked to other modules, in effect, to coordinate perception, decisions and movement.

His findings, reported in the 1970s, filled out a picture of the brain as a neural documentary crew, with specialists — in sound, in lighting, in judging distance, judging expressions — all working together to produce a coherent picture of the world and how to act in it.

“He was the first one to really articulate this whole notion of distributed functions, that in order to act in the world, there are a number of modules that work together,” said John Morrison, dean of basic sciences in the graduate school of biomedical sciences at Mount Sinai School of Medicine in New York.

Researchers later drew on Dr. Mountcastle’s findings to construct detailed three-dimensional maps of the brain, to take direct recordings of brain cells in “conversation” with their neighbors, and to develop sophisticated technology to allow paralyzed people to manipulate mechanical arms with their thoughts.

Vernon Benjamin Mountcastle Jr. was born on July 15, 1918, in Shelbyville, Ky., the third of five children of Vernon Mountcastle and Anna-Frances Marguerite Waugh. His father was in the concrete business, and his mother worked at home. The family moved to Roanoke, Va., when the boy was 3, and soon he was excelling in school, skipping two grades. He graduated from high school at 16 and earned a degree in chemistry from Roanoke College, in three years, graduating in 1938.

He attended Johns Hopkins for medical school, completing his degree in 1942 before receiving orders to join the Navy’s medical corps. He served in North Africa and in Europe during World War II, participating in the Normandy invasion.

He returned to Johns Hopkins in 1946, hoping to join its neurosurgery residency program. But the program was full, so he took a temporary position doing lab work in physiology, “and he found he loved it,” Dr. Snyder said. That same year he married Nancy Clayton Pierpont, who survives him. In addition to his wife and his daughter, he is survived by a son, Vernon III; a sister, Marguerite Cook; six grandchildren; and two great-granddaughters.

Dr. Mountcastle received many awards, including the prestigious Lasker in 1983 and the National Medal of Science in 1986. He wrote or co-wrote more than 100 scientific papers and a book, “The Mindful Brain: Cortical Organization and the Group-Selective Theory of Higher Brain Function,” with Dr. Gerald Edelman. It became a standard text in the field. At Johns Hopkins, he directed the department of physiology from 1964 to 1980 before finishing his career as a professor of neuroscience.

Three generations of brain scientists knew Dr. Mountcastle as a formal, soft-spoken man, elegant in his tan suits, possessing a patience and civility seemingly from another era.

For many years he was in the habit of working a full day, stopping home for dinner at 6, then returning to the lab until midnight. In an autobiography he wrote for the Society for Neuroscience, he described a 1992 lab study, of the motor cortex, that he realized would be his last. “I was nearly brokenhearted to leave it,” he wrote, “for I found no greater thrill in life than to make an original discovery, no matter how small.”

Published in The Burlington Free Press on Jan.18, 2015