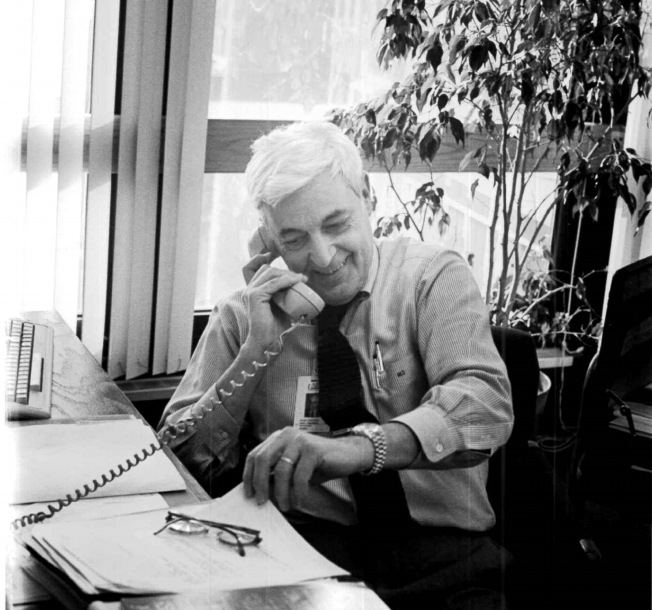 Dr. Roger C. Duvoisin, a neurologist who played a leading role in breakthroughs in treating Parkinson's disease and discovering the genetic roots of the disorder, has died. He was 90 and lived in Chapel Hill, N.C.

Duvoisin was chairman of the department of neurology at Rutgers Robert Wood Johnson Medical School in 1996 when his team of clinicians and researchers, in collaboration with scientists at the National Institutes of Health, identified the gene mutation responsible for many cases of Parkinson's. The discovery revolutionized Parkinson's research and opened the way to new therapies that are being tested in clinical trials today. Earlier in his career, Duvoisin helped pioneer the use of L-dopa as a treatment for Parkinson's. Described as a "miracle drug," L-dopa marked a significant advance in providing relief from the tremors, rigidity and other symptoms of the disease.

Duvoisin lived in Bergen County for many years. He and his first wife, Winifred (nee Murray), raised their four children in Woodcliff Lake. He was born in Towaco, N.J., to Swiss immigrants, Roger A. and Louise (nee Fatio) Duvoisin. After serving as a hospital apprentice in the Navy during World War II, he attended Columbia College under the G.I. Bill and graduated from New York Medical College in 1954. In medical school and later during his residency, he worked nights as an orderly and a laboratory assistant to make ends meet. He obtained additional financial support by joining the Air Force Medical Corps. In return, he owed four years of service, which he fulfilled at Lackland Air Force Base in San Antonio, Texas. There, he evaluated a pilot in the Mercury program who lost consciousness under low-gravity conditions. Duvoisin published papers on the phenomenon and initiated a pre-screening program for military pilots.

In 1962, he returned to Columbia to work under Dr. H. Houston Merritt, the preeminent academic neurologist of the day. Duvoisin was the first fellow of the Parkinson Disease Foundation and served as director of the Parkinson Clinic at Columbia's Neurological Institute. He developed the Columbia Rating Scale for assessing the severity of Parkinson's in any given patient. In later life, he looked back with satisfaction on his role in the 1960s in the groundbreaking research on L-dopa - short for levodopa - and on how colleagues from different disciplines had contributed.
"Levodopa changed everything," he said in 2010. "It was the most exciting decade of my life. For that brief period of time, laboratory, pathology, pharmacology and chemistry all converged to assist clinicians."

In 1973, Duvoisin left Columbia for the Mount Sinai School of Medicine in New York. Six years later, he returned to his native New Jersey, becoming the founding chairman of the department of neurology at the Rutgers Robert Wood Johnson Medical School in New Brunswick. There, he secured a $3.5 million private gift—the largest in the history of the school—to establish the William Dow Lovett Center for Neurogenetics, which became the spearhead of his career-long quest to determine the fundamental cause of Parkinson's. He marshaled a team of clinicians and researchers to get to the bottom of the matter. An opportunity presented itself when Dr. Lawrence Golbe, a Rutgers neurologist, found two Parkinson's patients whose families included multiple members with the disease. Both families were from Contursi, a small village in southern Italy. Golbe and Dr. Giuseppe Di Iorio of the University of Naples together identified 61 Contursi residents and descendants who had developed Parkinson's. They traced the ancestry of all 61 to a couple who had lived in the late 1600s. Their study of what became known as "the Contursi Kindred" provided enough data for an all-out effort to identify the gene responsible. To that end, Duvoisin sought out a collaboration with the NIH's Dr. Robert Nussbaum, a clinical geneticist, and his colleague Dr. Mihael Polymeropoulos. Together, the research teams identified the culprit: a gene called SNCA that codes for the protein alpha-synuclein. The mutation causes the protein to clump together in what are called Lewy bodies, which have a toxic effect on brain cells. "Nearly 20 years later, it is clear that the discovery was transformative," the science journalist Jon Palfreman wrote in his book "Brain Storms: The Race to Unlock the Mysteries of Parkinson's Disease." Although the Contursi mutation is rare even among Parkinson's patients, "the role of alpha-synuclein has proved to be a vital clue in the wider war on the disease," Palfreman wrote.

Duvoisin had the warm bedside manner of the country doctors he had known growing up in rural New Jersey, and his powers of discernment in examining patients were considered extraordinary. The late Dr. Richard Heikkila, his close friend and collaborator at Rutgers, called him "the most brilliant diagnostician I have known." In the course of his career, Duvoisin published nearly 200 peer-reviewed journal articles, along with the book "Parkinson's Disease: A Guide for Patient and Family." After his retirement in 1996, the American Parkinson Disease Association established a program of research grants in his name.

In retirement, he lived in Marina del Rey, Calif., and Santa Fe, N.M., before moving to Chapel Hill, N.C. He was preceded in death by his first wife, Winifred, who died in 2006, and by his second wife, Mary (nee McGaw) Duvoisin, who died in 2011. He is survived by: daughters Anne Duvoisin Fisher of Blowing Rock, N.C., and Jeanne Blackmore of Charlotte, Vt.; sons Jacques, of Santa Fe, N.M., and Marc, of Los Angeles, Calif.; and five grandchildren.