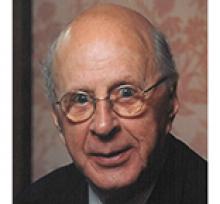 DR. ROBERT T. ROSS, CM, MD, FRCP, D.Sc. (Hon.) (b. 1924) June 24, 1924 - April 15, 2017 Beloved husband, Cherished father and grandfather Compassionate physician, inspiring teacher Robert is survived by his wife Angela; his children, Betsy Ross, John Ross, Gray Ross, Drew Salter and Diana Salter, and their families. A private interment has taken place at Robert's request. Friends are welcome to visit on Friday, April 21 from 5:00 p.m. to 7:00 p.m. at the home of Drew Salter and Hartley Klapman, 34 Aldershot Blvd. In lieu of flowers, donations may be made to a charity of your choice.

Winnipeg-born neurologist Robert Ross was widely respected as a clinician, researcher, medical writer, philanthropist and professor emeritus at the University of Manitoba. Dr. Ross graduated with his M.D. degree from the University of Manitoba in 1948 and went on to complete post-graduate studies in London, England. Dr. Ross had a long and illustrious career as a physician and educator. He was a faculty member at the University from 1953 to 1999. He was a member of the Department of Neurology and served as Head of Neurology at Health Sciences Centre from 1977 to 1984 while also directing the university's neurology program. During his tenure as Head, he introduced many innovations and was responsible for developing and directing the graduate training program. An excellent teacher, his former residents noted that he encouraged them to become outstanding physicians. In 1974 he founded and ran the fledgling Canadian Journal of Neurological Sciences, the first Canadian journal in the profession, serving as its publisher, editor-in-chief, business manager, and distributor from his office and home. In recognition of his contributions, in 1981 Dr. Ross was appointed Editor Emeritus of the Journal. An extensively published author, medical schools throughout North America use his seminal text, "How to Examine the Nervous System", now in its fourth edition.

He was a major supporter of many institutions and organizations, including those in education and the arts. Through his donations, the University's medical library was the first library on campus to house a computer lab. He was the director and benefactor of the Robert T. Ross Learning Centre in the Faculty of Medicine and founder and supporter of the Dr. R.T. Ross Medical Library Trust Fund and the John L. Ross Q.C. Bursary in Law. In 2012, he established the R.T. Ross Post Graduate Medical Education Scholarship at the University of Manitoba (the first scholarship of its kind available to the university's Neurology students). Dr. Ross served as President of the Canadian Neurological Society and the College of Physicians and Surgeons of Manitoba. For a number of years he was a trustee or director of Manitoba Medical Service. His extensive board contributions included his work with the Muscular Dystrophy Association of Canada (Medical Advisory Board), National Gallery of Canada, Winnipeg Art Gallery, Manitoba Chamber Orchestra and the Winnipeg Library Foundation. He was also a leading supporter of the Royal Winnipeg Ballet and a longtime member of the University of Manitoba Senate.