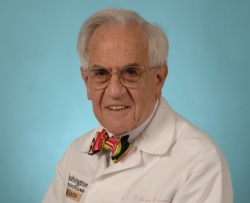 William M. Landau, MD, former American Neurological Association president, former head of the Department of Neurology at Washington University in St. Louis, and an advocate for universal healthcare, died on November 2, 2017 of natural causes at his home in University City, Missouri. He was 93.

A world-renowned neurologist and neuroscientist, Dr. Landau’s contributions to his field were extensive, particularly within his specialty of stroke and movement disorders. Landau-Kleffner syndrome was named eponymously for Dr. Landau and his colleague after they discovered communication difficulties in children with seizures in the 1950s. He was also highly regarded for his research concerning mechanisms of cerebral evoked responses, the pathological plantar reflex, spasticity, the fusimotor system in man and animals, the motor cortex, and Parkinsonism. Dr. Landau led a major study in the 1990s showing that half of all people who experience cardiac arrest have an impaired quality of life after they are revived, which raised questions about the effectiveness of starting cardiopulmonary resuscitation on all patients.

Dr. Landau led the neurology department at the Washington University in St. Louis from 1970 to 1991. There, he founded an electromyography and nerve conduction velocity laboratory  service,  the  first in the region.   His work as president of the American Neurological Association from 1978-79 has been digitized and preserved in the ANA Memory Bank, the archives of the ANA. Dr. Landau also served as president of the Central Society for Neurological Research, the American Board of Psychiatry and Neurology, and the Association of University Professors of Neurology; and as chairman of the National Committee for Research in Neurological and Communicative Disorders. He served on the editorial boards of Neurology, AMA Archives of Neurology and the Annals of Neurology.

Dr. Landau was a devoted civil libertarian who worked with the American Civil Liberties Union of Eastern Missouri for more than 50 years, including many years as a director. He also served as a director of the Physicians for a National Health Program, a non-profit research and education organization of 20,000 physicians, medical students and health professionals who support single-payer national health insurance.

Dr. Landau earned his undergraduate degree at the University of Chicago, and his MD from the Washington University School of Medicine. He is survived by his daughter Julie; sons David, John and George; 11 grandchildren and seven great-grandchildren. Roberta Landau, his wife of 61 years, preceded him in death in 2008.