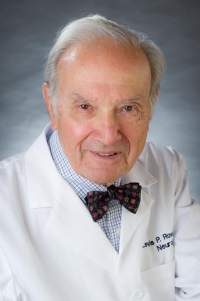 One of America's great neurologists, Lewis P. (Bud) Rowland, MD, died on March 16 after suffering a stroke at age 91. He was cared for expertly and lovingly in the Neuro ICU at Presbyterian Hospital, a unit he had created during his 25 year tenure as chair of the Columbia University Department of Neurology. Rowland helped shape modern neurology as a gifted and compassionate clinician, researcher, teacher, and author. He was a world-renowned expert in ALS and past president of both the American Academy of Neurology and the American Neurological Association. Shortly before he graduated from Brooklyn's Erasmus Hall High School, his parents changed the family name to avoid anti-Semitic quotas. It worked. Rowland attended Yale University and Yale School of Medicine. He played basketball for Erasmus and Yale.

He was an avid Dodgers and Knicks fan and always rooted for the underdog. During the McCarthy period, Rowland was fired from the National Institute of Health, NINDS because he had been the past president of the American Association of Interns and Medical Students and an advocate for national health insurance. Ironically, many years later, he wrote the official history of NINDS at their invitation. Although not religious, Rowland was proud of being one of the first Jewish chairs of a clinical department at both UPenn and Columbia Schools of Medicine. He was a strong advocate for providing one- class health care to all. As his colleague Howard Hurtig, MD, wrote, "In his 3 decades of leading two departments of neurology, Rowland imprinted so many talented, aspiring young people with his love of science, devotion to family, humanistic compassion, capacity for moral outrage, and high standards."

Rowland was kind to everyone he met and had a warm sense of humor. He and his wife, Esther, shared a 64-year love affair. They traveled the globe and made friends everywhere. In addition to Esther, he adored his brother Ted, his children Andy, Steve and Joy, and his grandchildren, Mikaela, Liam, Cameron, Mariel and Zuri, their partners and two great- grandchildren. He was our hero and role model.

Please send donations to the CUMC Department of Neurology c/o Matt Reals: mr3134@columbia.edu in his honor.