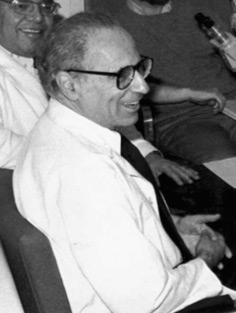 Esteemed neuroscientist and former Professor of Neuropathology at New York University Medical Center, Irwin Feigin, MD, was born on May 13, 1915, in Manhattan, and died peacefully on January 22, 2015, in Jamaica, Queens, New York. During World War II, Dr. Feigin attended Columbia College at Columbia University (from where he graduated at the top of his class), and attended the New York University School of Medicine. Dr. Feigin then served for the United States Army in the Medical corps, landing in France the day after D-Day. While working for the military, he was engaged in research on the evidence of German biological warfare. Dr. Feigin's experience on the beaches of Normandy engendered a life-long abhorrence of aggression.

Returning to the US, Dr. Feigin began his research career in neuropathology at NY Presbyterian Medical Center, where he worked with the eminent pathologist Dr. Abner Wolf (who would later become his brother-in-law). Dr. Feigin then spent time working at both Syndenham Hospital and Mount Sinai before joining the faculty at NYU, where he remained until his retirement in 1994. Dr. Feigin became the director of the neuropathology laboratory at NYU Medical Center and Bellevue Hospital in 1956. Throughout his time at NYU, Dr. Feigin also held numerous consulting positions throughout the New York area.

Professor Feigin’s career was dedicated to research in neuropathology. He made numerous seminal contributions to the literature throughout his career. He was particularly known for one of his first papers, “Sarcoma arising in glioblastoma of the brain.” In this study, he discussed 3 primary malignant brain tumors, each of which was composed of 2 dissimilar malignant tissues. One component, of glial origin, was essentially like that in glioblastoma. The other, mesenchymal in origin and character (and resembling a spindle cell fibrosarcoma), was believed to have originated secondarily in the walls of the hyperplastic blood vessels that are so common in glioblastomas.

In his laboratory in the old, red brick Bellevue Hospital, the whirring and clicking of his mechanical hand cranked calculator was always accompanied by classical music on the radio. The calculator was in use to compare water content of brain tissue that had been weighed before and after desiccation in his studies of cerebral edema. With Dr. Nina Poppoff, he confirmed earlier demonstrations of the resistance of the arcuate zones and cerebral cortices to edema in a wide variety of conditions and the loss of myelin that often accompanied its presence in deep white matter. An amateur of classical staining methods he was ably assisted by the technical wizardry of Julia Naoumenko, who, like Dr. Gleb Budzilovich, Irwin's major collaborator in later years, came from Russia, a country that had a special place in Irwin's thoughts. Together, his congenial team studied mucopolysaccharides in the brain extracellular space and the reactions of astrocytes and microglia in a wide variety of conditions. It was for this work on edema and its contribution to demyelination that Irwin Feigin wished to be remembered.

Dr. Feigin had a special ability to make his laboratory a place of welcome and stimulation for all who shared his enthusiasm for neuropathology. When I (D.Z.) first came to NYU in 1988, Dr. Feigin was still practicing at Bellevue Hospital. At that time, the Division of Neuropathology had its own suite of offices and laboratory. The Division faculty included Dr. Gleb Budzilovich, the Division Chief, Dr. Humberto Cravioto, Dr. Douglas Miller, and Dr. John Pearson. Dr. Feigin trained many fellows and all who worked alongside with and were encouraged by him recall him as a true gentleman. Those of us who were privileged to know him personally and who worked with him admired his intelligence, dedication, and abilities in research and education.

Irwin Feigin was a proud Active Member of the American Association of Neuropathologists. In 1962, he became the secretary, and he served as President of the Association in 1968. Dr. Feigin married pianist Mollie Kanowitz in 1949. She had studied with Josef Lhévinne at the Juilliard School. They were together for 53 years until her death in 2002. He was devoted to classical music and, for many years, served as president of Municipal Concerts in New York, which was under the direction of conductor Julius Grossman. He also liked to point out that he served for 50 years with great success as his wife’s page-turner in her many chamber music concerts. Dr. Feigin is survived by 2 children, Joel Feigin, Professor Emeritus of Music at UC Santa Barbara, and Diane Badzinski, presently working as a freelance editor.