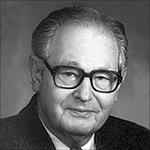 Dr. Floyd John Brinley, Jr. passed away peacefully on January 11, 2017 at the age of 86 after a brief illness. "Jack"was born in Battle Creek, Michigan on May 19, 1931, the only son of Floyd John Brinley Sr. and Neta Faye Johnson. He attended high school in Toledo where he was active in the debate club and ran cross country. Dr. Brinley earned his BA from Oberlin College in 1951, and his MD from the University of Michigan in 1955. He continued his studies at the Johns Hopkins University where he earned his Ph.D. in biophysics in 1961. He remained on faculty there as Associate Professor of Physiology where he studied the flow of ions across neural membranes, contributing significantly to the worlds body of knowledge in this area. He later moved to the University of Maryland as Professor of Physiology where he continued his research and teaching activities.

In 1979, Dr. Brinley moved to the National Institutes of Health where he worked for many years helping to direct the large NIH extramural research program for neurologic disorders. In this role, he was in charge of guiding the institute's research grants, contracts and fellowships that supported neurologic research in a wide variety of areas. Throughout his career, Dr. Brinley received numerous accolades and honors for his service in the Public Health Service Commissioned Corp. For many years, he was commander of the NIH Disaster Medical Assistance Team. He had memberships in many professional societies and served on a number of editorial boards. He was also a member of the prestigious Cosmos Club. Dr. Brinley was a life-long true intellectual. He devoted his professional life to promoting research and advancing human knowledge. He always placed great value on scholarship and loved the challenge of learning and discovery. He taught himself to speak fluent Spanish. He retained metal vigor throughout his life, and amused himself by studying college level algebra and reading novels in Spanish well into his 80's. After retiring from full time work at NIH, he continued to practice medicine part time just to keep his mind sharp, finally retiring at the age of 82. Despite never having done an ER residency, he accumulated enough experience in practice to become eligible to take the ER boards. At the age of 65, he became a board certified ER physician, an accomplishment of which he was always most proud.

He was also a life-long accomplished chess player, running the chess club at Ashbury Village for a number of years. Jack married Marlene Hildreth Schoen in 1955, and they had three children Floyd John Brinley III, Debbie Ann Brinley, and William Schoen Brinley who all survive him. He is also survived by seven grandchildren: Floyd Brinley IV, Ari Konstantopolous, Claire Brinley, Alexandra Brinley, Mick Konstantopolous, Sophia Konstantopolous, and Scott Brinley. Jack's life was a full one. He had a wry and clever sense of humor. He enjoyed giving speeches at family events, all of which were memorable and quite entertaining. In his later years he took great pleasure in arranging trips to the Caribbean where he enjoyed snorkeling and relaxing on the beach. He was always extraordinarily happy to have his family together with him and relished the fellowship at these events. In his later years, he moved to the Ashbury Village retirement community where he was active on a number of boards and made many good friends. He always enjoyed fine dining, unusual food, and a good bottle of wine. Jack was always extremely hardworking, demanding nothing less than excellence from himself and those around him. While his children found that annoying when they were younger, all have come to realize how valuable the life lessons Jack taught them have turned out to be. One of his favorite comments to his children/grandchildren as they complained about some hardship was that would give us something to talk about with our therapists. He will be missed. A private memorial service for family and friends will be held this summer in Colorado. A private memorial service for family and friends will be held this summer in Colorado.