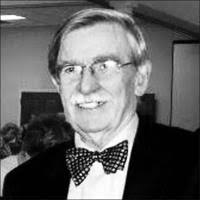 Edward L. Hogan Charleston - Edward L Hogan, MD, the former chairman of the neurology department at the Medical University of South Carolina (MUSC), died on Sunday at the age of 87. The cause was complications related to cancer. A physician, scientist, teacher and mentor known for being both a scholar and a gentleman, Hogan enjoyed a career spanning five decades. He published more than 500 papers, served as a role model for numerous students, residents, neurologists and basic research scientists and also treated countless patients throughout South Carolina and beyond with his hallmark gentle, attentive bedside manner. As neurology chairman at MUSC, Hogan established a world-renowned laboratory investigating the basic neurochemical and clinical aspects of neurological diseases, such as muscular dystrophy, multiple sclerosis, spinal cord injury, Parkinson's disease and Alzheimer's disease. He continued his research on multiple sclerosis at the Medical College of Georgia at Augusta as well as the National University of Ireland, Galway. After relocating to Charleston in 1973 from Chapel Hill, where he was on the faculty of the University of North Carolina School of Medicine, Hogan and his wife Gail embraced their new city, making a home with their five children on the peninsula, one that was open to all and where they regularly hosted legendary Christmas parties. Often donning a jaunty bowtie from his sizable collection, the conversant, gracious Hogan delighted in delving into most any topic with guests of all ages and backgrounds, holding forth on everything from Shakespeare to sports statistics and equally relishing a deep think or a good laugh. At the same time, Hogan remained true to his Massachusetts roots, which were readily identifiable by both his Boston brogue, his Red Sox bow tie and his devotion to his hometown alma mater, Tufts University School of Medicine, where he had earned an undergraduate and medical degree. A technology enthusiast, a sports buff, a Mercedes aficionado and a media junkie, he was also known for his tenacious devotion to running, a passion he developed while competing on the cross-country team at Tufts. He continued to do so tenaciously throughout his life and was often spotted geared up around town or collecting race trophies well into his 80's. A proud Irish American, he so embraced his heritage that in the 1990's he traveled with Gail to Ireland to attend a medical conference and ended up setting down roots in Leenane, County Galway. There, they refurbished a stone cottage from its shell, and for the next 25 years spent several cherished months annually. He continued his research while there, setting up laboratories as an adjunct professor of microbiology at the National University of Ireland, Galway. With all his bona fides, Hogan often underscored that it was the family that orbited around him and Gail that gave the most meaning to his life. It had been family that had first informed his choice of the field of neurology, after experiencing during his teenage years his younger brother Paul's battle with muscular dystrophy. His love of family also involved his enlisting three generations to run the Turkey Day Run, regularly sharing a spot of superior Irish whiskey at a family gathering and cheering on his grandchildren on sports teams or in choirs. Edward Leo Hogan, the devoted husband of Gail Manning Hogan for nearly 60 years, was born in Arlington, Massachusetts on July 26, 1932, the eldest son of Patrick Hogan and Margaret Mary McSweeney Hogan. He earned his undergraduate and medical degree from Tufts in 1957, and then completed residencies in internal medicine at Peter Bent Brigham Hospital and neurology at Boston City Hospital. He later completed his postdoctoral training in neuropathology and biochemistry at Harvard Medical School and Tufts University. He served as a captain in the Medical Corps of the US Army, stationed at Fort Dix, New Jersey. In 1966, Dr. Hogan joined the faculty at the University of North Carolina School of Medicine in Chapel Hill, where he remained until joining the Medical University of South Carolina in 1973, chairing the Department of Neurology and also serving as a professor of neurology, biochemistry and molecular biology. He has been recognized in Best Doctors in America and in 1998 received the Medical University's Distinguished Faculty Award. He is survived by his wife, Gail Manning Hogan, his children; Patrick Francis Hogan, Maryellen Gibson and her husband, Reggie Gibson, Maura Hogan and her husband, Scott Watson, Timothy Hogan and Michael Hogan and his wife, Heather Hogan; his grandchildren, Emma Gibson, Katie Hogan, Peter Hogan, Margaret Gibson and Beatrice Watson, his siblings, Anne Deveau and her husband, Ruben Deveau, Margaret Mullen and her husband, John Mullen and Leo Hogan and his wife, Barbara Hogan. He was predeceased by his parents and by one brother, Paul Hogan.