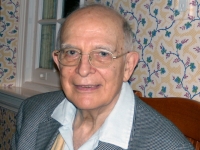 Dr. Donald Lewis. Professor of Neurology at University of Pennsylvania died August 13, 2015 in Bryn Mawr, Pennsylvania. Dr. Schotland was born September 21, 1930 in Bloomfield, NJ. He was educated at Harvard University and earned his AB and MD degrees in 1952 and 1957, respectively. He was a resident in neurology and fellow in neuropathology at Columbia University, where he was also a member of the faculty from 1962-1967. He joined the Penn faculty in 1967, eventually becoming director of the Henry Watts Center for Neuromuscular Research. Dr Schotland was a pioneering researcher in neuromuscular disease who trained a generation of academic neurologists. At his request no memorial services were held. He was predeceased by his wife Dr Marilyn Schotland. He is survived by his sons John, Tom and Peter and four grandchildren.