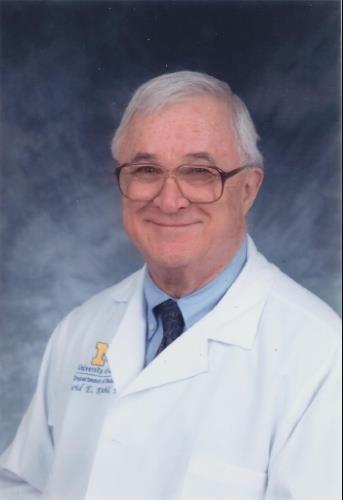 David E. Kuhl, M.D., a retired University of Michigan nuclear medicine professor known internationally for his pioneering work in positron tomography, died at his Ann Arbor home on May 28, 2017. He was 87. Dr. Kuhl, born in St. Louis, Mo., youth in Berwick, PA, earned a bachelor's degree at Temple University. He received an M.D. from the University of Pennsylvania in 1955 and completed his residency at the Hospital of the University of Pennsylvania. He served on the faculty of the University of Pennsylvania from 1958-76 and the University of California Los Angeles from 1976-86. Dr. Kuhl joined the University of Michigan faculty in 1986 as the Chief of the Division of Nuclear Medicine and served for twenty-five years until his retirement in June 2011. Early in his career, Dr. Kuhl developed a new method of tomographic imaging and constructed several tomographic instruments. The imaging techniques he invented were further developed in the 1970s and are now called positron emission tomography. Dr. Kuhl's body of research focused on the development of new measures of neurochemical and metabolic processes within the living brain using radioactive tracers and emission reconstruction tomography. These techniques enabled drug development targeted to the earliest stages of degenerative brain disease. Dr. Kuhl was a founding member of the Society of Nuclear Medicine. Among the honors Dr. Kuhl received, are the Japan Prize from the Science and Technology Foundation of Japan (2009), the Ernst Jung Prize for Medicine from the Ernst Jung Foundation (1981), the Charles F. Kettering prize from the General Motors Cancer Research Foundation (2001) and the Benedict Cassen Prize for research leading to a major advance in nuclear medicine science from the National Institutes of Health (1996). Traveling extensively with his beloved wife of 63 years, Dr. Kuhl lectured and presented papers related to his research. He enjoyed reading, listening to music, and was a skilled modeler, designing and building detailed models from scratch. He is survived by his wife, Eleanor, his son David (wife Diane), and his grand children, Katherine and Jennifer. According to his wishes, he has been cremated and will be buried at the Forest Hill Cemetery in a private ceremony.