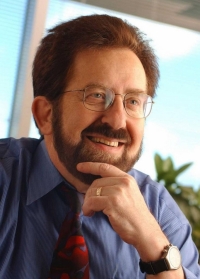 Allen Roses, a maverick researcher whose team of scientists identified two genes that put healthy people over 65 at higher risk for Alzheimer’s disease, died on Friday in New York. He was 73. Dr. Roses had a heart attack at Kennedy International Airport on his way to a medical conference in Greece, his daughter Stephanie Roses said. Before his death, he had been testing a drug that researchers hoped would help people stave off dementia.

In the early 1990s, Dr. Roses and his collaborators at Duke University rejected prevailing assumptions that the buildup in the brain of a protein plaque called amyloid directly caused memory loss and other mental impairments in Alzheimer’s patients. Instead, they maintained that the plaque largely resulted from the disease, and that the deterioration of brain function actually originated from the variation of a single gene. In 2009, after financing his research with a loan of almost $500,000 on his house, Dr. Roses and his team identified a second gene that they said could help predict whether the cognitive ability of an older person, generally between 65 and 83, would decline within about five years of acquiring Alzheimer’s. There are currently no treatments to prevent or delay the disease, but if therapies do become available, identifying people at risk will be vital. Delaying the onset of dementia by five years through medicine could cut the cost of patient care nationally by $50 billion annually, according to the Alzheimer’s Association. The organization paid tribute to Dr. Roses this week, saying that his research had “significantly advanced our knowledge and understanding” of the disease.

In countering the amyloid theory, which had become the conventional wisdom and the basis for most research funding, Dr. Roses maintained that dementia in Alzheimer’s patients resulted from a gene variation that inhibits mitochondria, or mini-organs within a cell, from metabolizing glucose and oxygen, a process necessary to fuel neurons in the brain. Without the energy generated by that fuel, the neurons cannot communicate with one another. Unable to reproduce, they die and are not replaced, and brain function deteriorates. Dr. Roses, a clinical neurologist, spent most of his career at Duke and was the senior vice president for genetics research and pharmacogenetics at GlaxoSmithKline. In his research, he determined the chromosomal locations for more than a dozen other diseases, including Parkinson’s, Lou Gehrig’s and muscular dystrophy.

Allen David Roses was born on Feb. 21, 1943, in Paterson, N.J., the son of Morris Roses, who owned a stationery store, and the former Ceil Schwartz, both Jewish immigrants from Poland who escaped the Holocaust. His father died when Allen was about 13, forcing him to help support the family by working odd jobs and running numbers for mob-connected bookies. After graduating from the University of Pittsburgh and receiving his medical degree from the University of Pennsylvania, he was a medical resident at Columbia University and Duke. He served as a doctor in the Air Force in Vietnam and was discharged as a captain. Later, he was a professor of neurology and neurobiology at Duke and chief of neurology at Duke University Medical Center, founding director of the Joseph and Kathleen Bryan Alzheimer’s Disease Research Center and director of the Center for Human Genetics. Dr. Roses left Duke to join GlaxoWellcome (now GlaxoSmithKline) in 1997. He returned to the university in 2007 as a professor and director of the Deane Drug Discovery Institute. He owned Zinfandel Pharmaceuticals, which has been collaborating with Takeda Pharmaceuticals, a Japanese company, on clinical trials to determine whether Actos, a drug ordinarily prescribed for diabetes, can delay Alzheimer’s. The trials, part of a multiyear study, have involved thousands of participants. The tests have been seeking to determine whether doctors can predict the risk of cognitive loss in people with Alzheimer’s and whether a low dose of the drug can help in mild cases.

Dr. Roses was also the chairman of the American Dance Festival. In addition to his daughter Stephanie, he is survived by his wife, Ann Saunders, a fellow neuroscience researcher who also teaches at Duke; three other daughters, Maija Roses, Joanna Roses Ryan and Michelle Roses Holleman; his sister, Estelle Irizarry; and four grandchildren. He lived in Durham, N.C. The heart attack that caused his death was his third since 1990, but his pace never faltered. “He treated every day like it was his last one, because he knew it probably was,” Stephanie Roses said. “He woke up every morning and would blink three times and say, ‘I have another day.’”