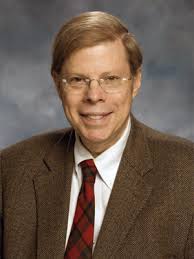 William "Bill" Gessner Johnson, M.D. (1942-2020), Professor of Neurology at the Robert Wood Johnson Medical School of Rutgers University, died early in the morning of January 30, 2020, with his wife and sons by his side, from complications following a hemorrhagic stroke. As a molecular neurogeneticist, Bill made significant contributions to our understanding of neurodegenerative and neurodevelopmental disorders. In addition to a lifetime of accomplishments, he was a devoted husband and father.
Born to an engineer and a kindergarten teacher in Chicago on April 9, 1942, and raised in Chicago, Short Hills, N.J., and Wilmette, Ill., Bill was a born scientist and teacher. He graduated from New Trier High School in Winnetka, Illinois, as valedictorian of the class of 1960. He continued his education at Princeton University, graduating summa cum laude with an A.B. in Chemistry in 1963. Bill earned his M.D. from Columbia University, College of Physicians and Surgeons in 1967, and completed his internship and medical residency at New York Hospital-Cornell Medical Center. He was commissioned as a Lieutenant Commander in the United States Public Health Service under the Berry Plan, serving at the National Institutes of Health in the Neurochemistry lab of Dr. Roscoe O. Brady. Bill went on to complete his residency in neurology at the Hospital of the University of Pennsylvania in 1975.

Bill's academic and hospital appointments began in 1975 as an Assistant Professor of Neurology at Columbia University, College of Physicians and Surgeons (P&S), and an Assistant Attending Neurologist at Presbyterian Hospital. He became Associate Professor and Associate Attending Neurologist in 1983. He served as the course director for Introduction to Clinical Medicine at Sarah Lawrence College from 1977-1992, and Genetics 101S at Columbia University P&S. He moved to New Jersey in 1992 to become Professor of Neurology and first Director of the William Dow Lovett Laboratory of Molecular Neurogenetics at UMDNJ - Robert Wood Johnson Medical School in Piscataway, as well as Attending Neurologist at Robert Wood Johnson University Hospital in New Brunswick.
Bill served on many medical advisory boards over his career, such as the National Ataxia Foundation, and was a past chair of the National Tuberous Sclerosis Foundation. He made meritorious contributions as an active member of the Child Neurology Society. Bill was also a long time Active Member of the American Society of Human Genetics, and a Member of the American Neurological Association and the International Society for Autism Research (INSAR), among many others. He also authored or co-authored nearly 100 articles and authored, co-authored, edited or co-edited nearly 50 books, monographs or chapters.

Bill's contributions to science include work on diseases and syndromes including Fabry's, Gaucher's, Hunter's, Hurler's, Tay-Sachs, and many others. Particular discoveries were made in the areas of lysosomal storage diseases, identification of causative genetic variants in neurodegenerative disorders, and in identification of genetic variants acting in both mothers and their children that alter the in-utero environment subsequently altering the risk of having a developmental disorder. He was part of the team that identified the first gene for Parkinson's. At the time of his death, Bill was Primary Investigatorof three studies on autism: the first two to confirm and extend the findings of others that sulforaphane treatment improves core symptoms of autism; the third to investigate contribution of folic acid supplementation in reducing the risk of autism modified by certain relevant genetic variants. Bill was also very active in using Whole Exome Sequencing as a tool to search for new genetic variants that cause or modify onset or progression of neurodegenerative disorders. He was co-inventor on five US patents related to developmental disorders caused by combinations of genetic and environmental factors. Over the course of his career Bill also mentored numerous graduate, undergraduate and postdoctoral fellows.

Bill met his wife Sandra (née Trevarthen) in 1971 at St. Alban's Episcopal Church in Washington, DC. They were married in 1973 and moved to Philadelphia, and eventually to New York, where they had two sons, Trevor and Niels. He was a proud and devoted father and a font of sage advice and wisdom - and puns - for his children and grandchildren. Bill was eternally positive, even in the face of adversity. He was also active in church life for many years, serving on vestries, leading bible study, serving as Usher Coordinator, and Stewardship Chair, to name a few. Bill spent his senior year of high school as an American Field Service foreign-exchange student with a family in Gothenburg, Sweden. He loved exploring other cultures and continued traveling the world during and after college, giving lectures at myriad institutions, both in the US and overseas. Bill spoke or presented at conferences from Vancouver to Singapore, from South Africa to Tokyo. He was fluent in at least six languages, including French, Swedish, German and Russian, and was interested in languages from Old Icelandic to Basque to Mayan. In his free time he was also an avid bibliophile and oenophile. As a professional researcher on heredity, Bill was fascinated with genealogy. Over many years of travel and inquiry, he had traced a portion of his family tree back to St. Arnulf of Metz (c. 582-645), and was a proud member of several lineage societies, including the Society of Colonial Wars, the Baronial Order of the Magna Charta, and the Jamestowne Society.